And the scream, Bacon's scream, is the operation through which the entire body escapes through the mouth
(or, Three Studies for Figures at the Base of a Crucifixion) (2005-09)
for oboe (+ musette, english horn), clarinet (+ E-flat, bass),  trumpet, trombone, harp, percussion, violin, viola, double bass 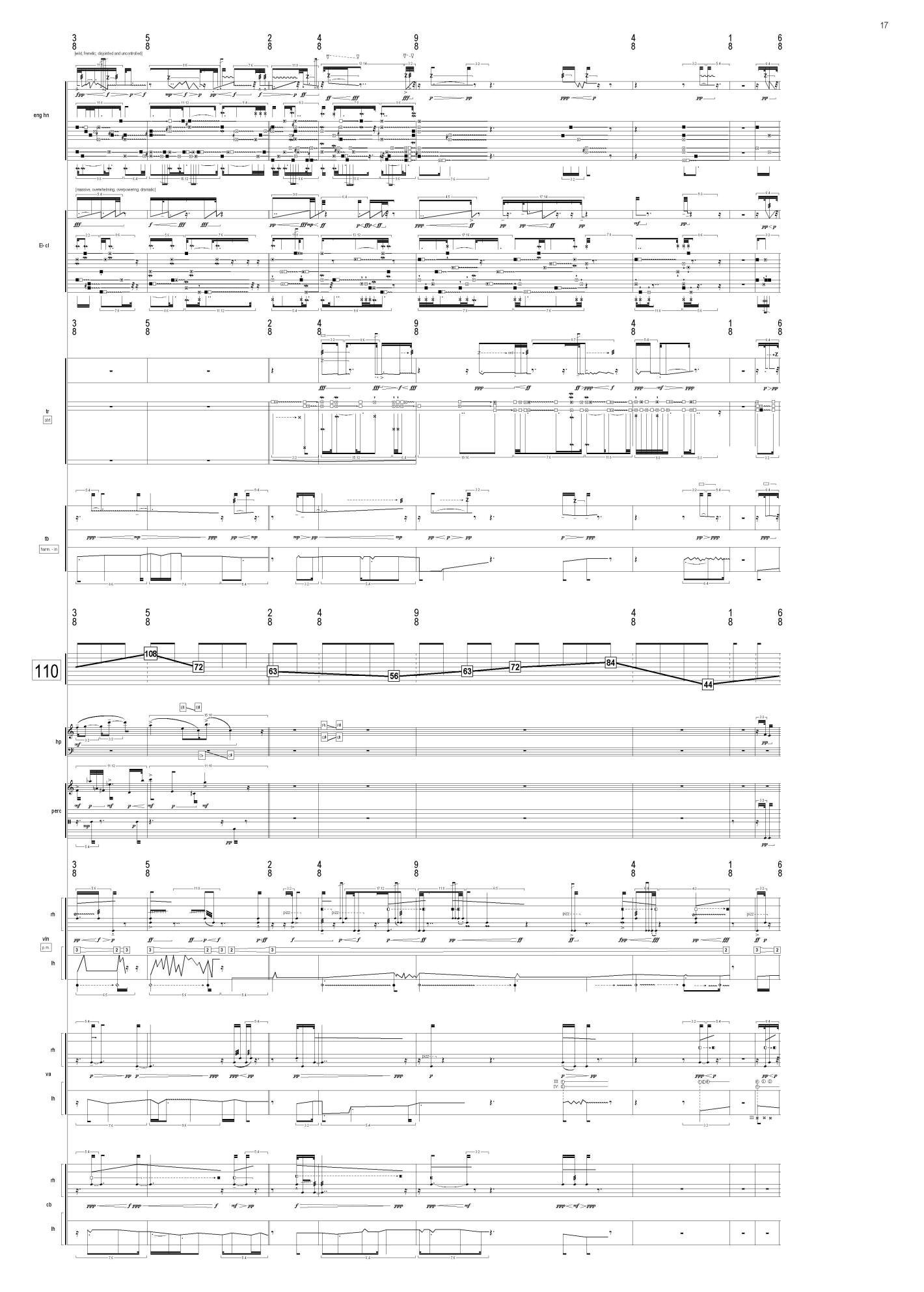 “...this line is decorative; it lies at the surface, but it is a material decoration that does not outline a form.  It is a geometry no longer in the service of the essential and eternal, but a geometry in the service of ‘problems’ or ‘accidents’:  ablation, adjunction, projection, intersection.  It is thus a line that never ceases to change direction, that is broken, split, diverted, turned in on itself, coiled up, or even extended beyond its natural limits, dying away in a ‘disordered convulsion’ …

“One scrambles it from one contour to the other, like a gray that spreads itself everywhere.  But this gray is not the undifferentiated gray of white and black; it is the colored gray, or rather the coloring gray, out of which new relations will emerge ….

“The first invisible forces are those of isolation:  they are supported by the fields, and become visible when they wrap themselves around the contour and wrap the fields around the Figure.  The second are the forces of deformation, which seize the Figure’s body and head, and become visible whenever the head shakes off its face, or the body its organism.  The third are the forces of dissipation, when the Figure fades away and returns to the field:  what then renders these forces visible is a strange smile.

“And here again, the body seems to enter into particularly mannered postures, or is weighed down by stress, pain, or anguish.  But this is true only if a story or a figuration is reintroduced:  figurally speaking, these are actually the most natural of postures, as if we caught them ‘between’ two stories ….

“This is what Bacon calls a ‘graph’ or a Diagram:  it is as if a Sahara, a zone of the Sahara, were suddenly inserted into the head; it is as if a piece of rhinoceros skin, viewed under a microscope, were stretched over it; it is as if the two halves of the head were split open by an ocean; it is as if the unit of measure were changed, and micrometric, or even cosmic, units were substituted for the figurative unit.  … Such is the suddenly outstretched diagram.  It is as if, in the midst of the figurative and probabilistic givens, a catastrophe overcame the canvas.

“Certainly music traverses our bodies in profound ways, putting an ear in the stomach, in the lungs, and so on.  It knows all about waves and nervousness.  But it involves our body, and bodies in general, in another element.  It strips bodies of their inertia, of the materiality of their presence:  it disembodies bodies.

“.. these marks … are nonrepresentative, nonillustrative, nonnarrative.  They are no longer either significant or signifiers:  they are a-signifying traits.  They are traits of sensation, but of confused sensations ….  It is as if the hand assumed an independence, and began to be guided by other forces, making marks that no longer depend on either our will or our sight.  … The painter’s hand intervenes in order to shake its own dependence and break up the sovereign optical organization ….

“The wiped and swept parts of the face here take on new meaning, because they mark the zone where the force is in the process of striking.  This is why the problems Bacon faces are indeed those of deformation and not transformation.  The transformation of form can be abstract or dynamic.  But deformation is always bodily, and it is static, it happens at one place; it subordinates movement to force, but it also subordinates the abstract to the Figure.  When a force is exerted on a scrubbed part, it does not give birth to an abstract form, nor does it combine sensible forms dynamically:  on the contrary, it turns this zone into a zone of indiscernibility that is common to several forms, irreducible to any of them; and the lines of force that it creates escape every form through their very clarity, through their deforming precision.

“It is from the diagram—at the center of the painting, at the point of close viewing—that the entire series emerges as a series of accidents ‘mounting on top of another.’”

- extracts from Gilles Deleuze, Francis Bacon:  The Logic of Sensation

The work is dedicated with utmost thanks and friendship to Daryl Buckley and the astonishing musicians of ELISION.