Being itself a catastrophe, the diagram must not create a catastrophe (or, Third Study for Figures at the Base of a Crucifixion) (2007-09)
for oboe (doubling musette & english horn) and B-flat clarinet (doubling E-flat & bass clarinets) 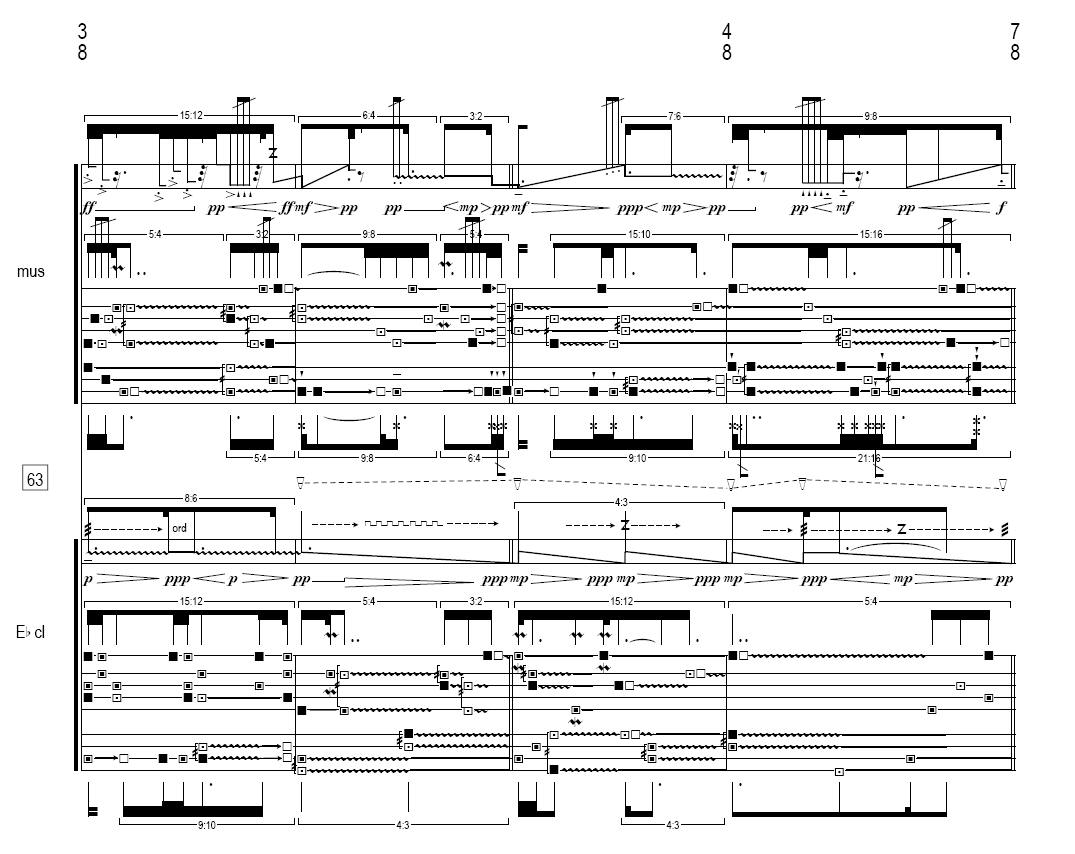 “… what will disrupt this space and its consequences, in a catastrophe, is the manual ‘diagram,’ which is made up exclusively of insubordinate color-patches and traits.  … One starts with a figurative form, a diagram intervenes and scrambles it, and a form of a completely different nature emerges from the diagram, which is called the Figure.

“There is indeed a change of form, but the change of form is a deformation, that is, a creation of original relations that are substituted for the form. … The diagram has introduced or distributed formless forces throughout the painting, … which are made use of as, precisely, ‘places.’

“And here again, the body seems to enter into particularly mannered postures, or is weighed down by stress, pain, or anguish.  But this is true only if a story or a figuration is reintroduced:  figurally speaking, these are actually the most natural of postures, as if we caught them ‘between’ two stories ….

“One scrambles it from one contour to the other, like a gray that spreads itself everywhere.  But this gray is not the undifferentiated gray of white and black; it is the colored gray, or rather the coloring gray, out of which new relations will emerge (broken tones) that are completely different from relations of resemblance.

“.. these marks, these traits, are irrational, involuntary, accidental, free, random.  They are nonrepresentative, nonillustrative, nonnarrative.  They are no longer either significant or signifiers:  they are a-signifying traits.  They are traits of sensation, but of confused sensations ….  And above all, they are manual traits.  …  It is as if the hand assumed an independence, and began to be guided by other forces, making marks that no longer depend on either our will or our sight.  … The painter’s hand intervenes in order to shake its own dependence and break up the sovereign optical organization:  one can no longer see anything, as if in a catastrophe, a chaos.

“This is what Bacon calls a ‘graph’ or a Diagram:  it is as if a Sahara, a zone of the Sahara, were suddenly inserted into the head; it is as if a piece of rhinoceros skin, viewed under a microscope, were stretched over it; it is as if the two halves of the head were split open by an ocean; it is as if the unit of measure were changed, and micrometric, or even cosmic, units were substituted for the figurative unit.  … Such is the suddenly outstretched diagram.  It is as if, in the midst of the figurative and probabilistic givens, a catastrophe overcame the canvas.

“It is from the diagram—at the center of the painting, at the point of close viewing—that the entire series emerges as a series of accidents ‘mounting on top of another.’”

- extracts from Gilles Deleuze, Francis Bacon:  The Logic of Sensation

The work is dedicated to Peter Veale, Richard Haynes, Daryl Buckley and ELISION, and is extracted from the larger work And the scream, Bacon's scream, is the operation through which the entire body escapes through the mouth (or, Three Studies for Figures at the Base of a Crucifixion).